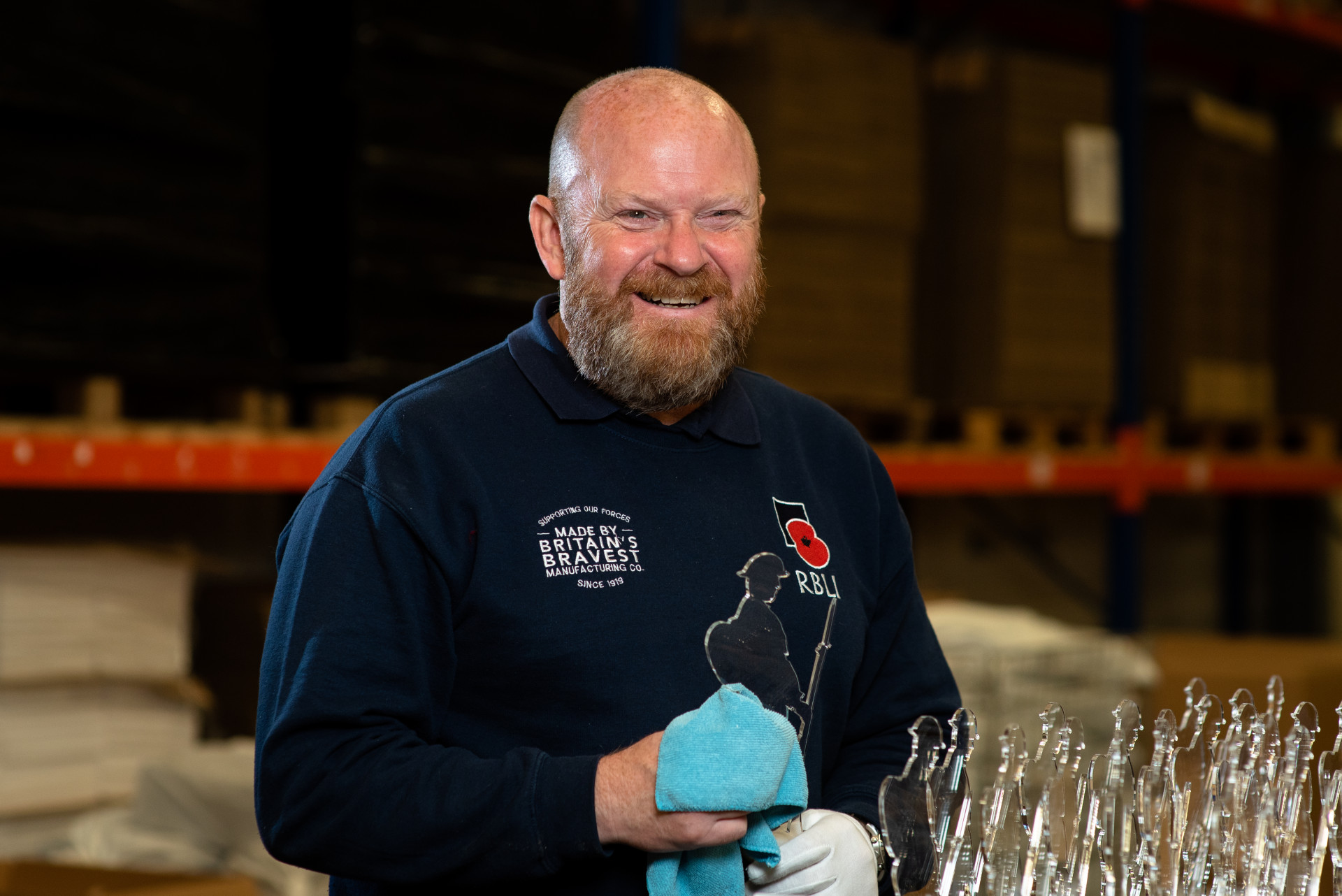 The former head of the Army Lord Richard Dannatt is backing Royal British Legion Industries’ VE Day ‘Tommy in the Window’ campaign, calling on the British public to show their support for next month’s historic 75th  VE Day anniversary.

As the coronavirus crisis escalated and the country went into lockdown, public VE Day events were quickly cancelled, leaving the country with no means of getting together and recognising the 8th May Anniversary of the end of the Second World War in Europe.

Lord Dannatt is today supporting RBLI’s VE Day ‘Tommy in the Window’ campaign. A team of injured veterans and people with disabilities working in RBLI’s Kent-based social enterprise factory, Britain’s Bravest Manufacturing Company (BBMC), have produced a special edition VE Day 75 Tommy and Window Stickers for the 8th May Anniversary. The campaign encourages people to put them in their windows in the run up to and including the date to show their support.

General Lord Dannatt said: “This is a good time to remember that the nation has been through difficult times before and has come through challenges by pulling together. The RBLI Tommy figure represents the price of victory and this special edition Tommy remembers many lives lost and many sacrifices that won peace for Europe in 1945. As the Tommies are made by veterans they also represent our country’s support for veterans today.”

“We have had to rightly change our way of life because of COVID-19 but we should not let it get in the way of commemorating the 75th anniversary of VE Day whilst at home.”

“Public mood is low, but we owe it to ourselves as a nation to recognise those who gave their lives in the Second World War, and also those who endured so much at home, to win us our freedom. I would hope that the country could draw a lot of strength from remembering the generations and all our relatives who pulled together at that time.”

“So we want to see the special VE Day Tommy figures proudly displayed in windows up and down the country for the 8th May when we all raise a toast to our veterans.”

All the money raised through the sale of the Tommies goes directly to supporting ex-servicemen and women through RBLI’s range of services, including their social enterprise factory, and supported homes.

As well as producing special edition VE Day ‘Tommy in the Window’ military figures and window stickers RBLI have a number of initiatives leading up to the big day. With lockdown and isolation taking its toll on our older generation and young children, morale is low. RBLI has launched free activity packs both for children and the elderly. The campaign has already seen hundreds of downloads as RBLI brings the generations together by encouraging children and adults to display their activity pack results online and in their windows. The charity will also be running online lindy hop dance lessons as part of the Tommy campaign, encouraging the public to take part in a VE Day door step dance on 8th May.

RBLI was set up in 1919 to provide essential support to troops returning from the First World War with tuberculosis.  Today it supports more than 17,000 people every year through housing, skills and employment, and welfare support throughout the UK.

RBLI’s social enterprise, Britain’s Bravest Manufacturing Company, is based on their Aylesford Village which also provides homes to more than 300 veterans and their families – many of whom have life-changing physical injuries and mental health conditions as a result of their service.

Much of the factory’s workforce have been deemed as essential workers during this crisis, producing pallets to support the national transport of food, pharmaceuticals and ventilators, as well as essential signage for national infrastructure projects. RBLI also runs LifeWorks, its employment support programme for veterans and military families around the world.

Last year, in celebration of its centenary, RBLI hosted Her Majesty The Queen to their village in Aylesford. Her Majesty opened a new £2million care facility, called Appleton Lodge, and launched the second phase of the charity’s £22 million development, the Centenary Village, laying a time capsule to be opened in 100 years.

The Centenary Village will see the charity provide homes to hundreds of more veterans and their families every year through further assisted living accommodation, specially adapted housing for veterans with disabilities and family homes. At the heart of the development will be a community centre with accessible gym.

To show your support for the 75th anniversary of VE Day, purchase your special edition Tommy at www.rbli.co.uk/veday