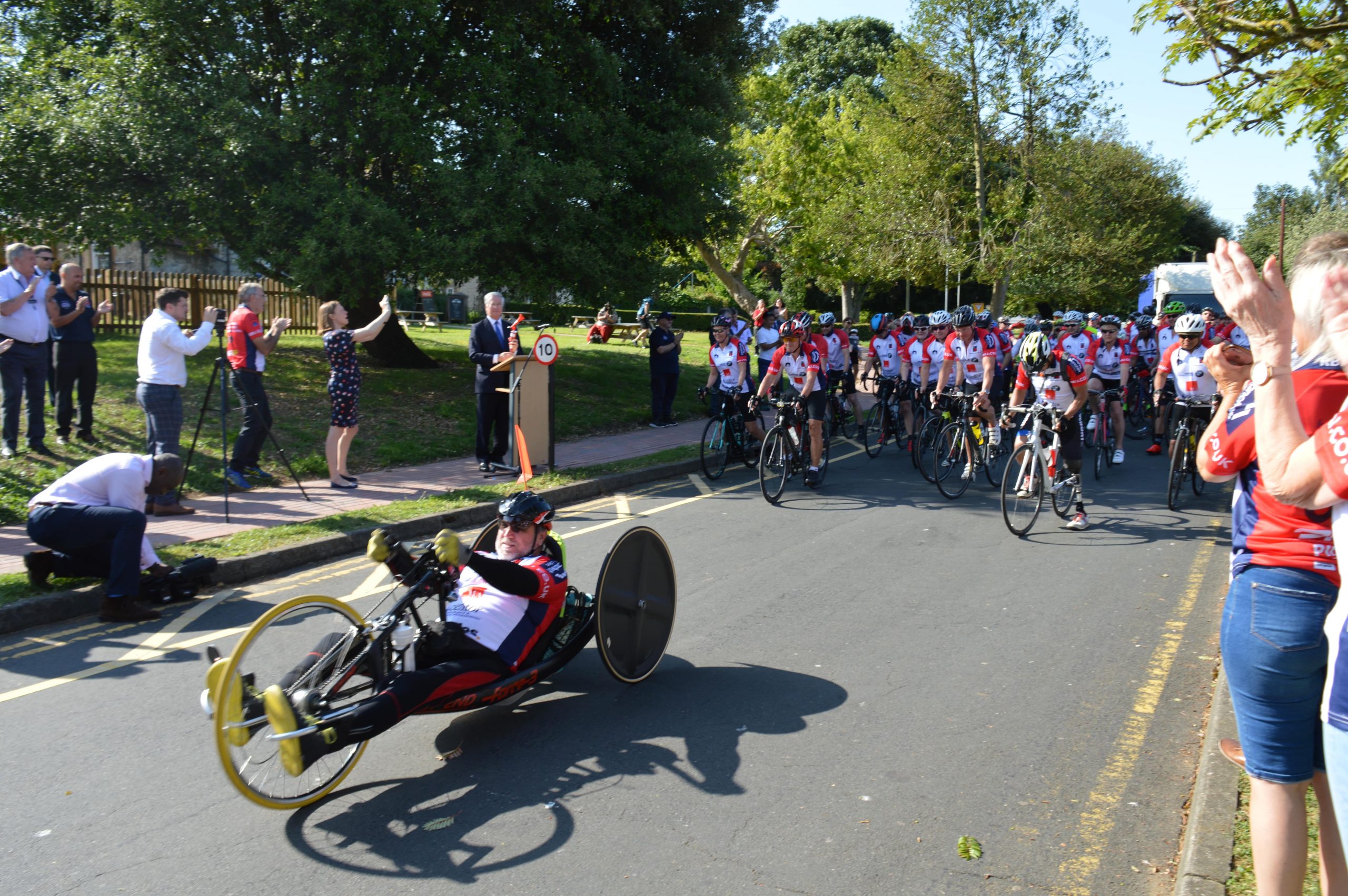 Injured veterans, six former Gurkhas and two world record breaking grandads were amongst 100 cyclists today who set off on a 150-mile cycle ride through the battlefields of the First World War to raise crucial funds for Royal British Legion Industries in line with their centenary year.

Launched by Sevenoaks MP Sir Michael Fallon, RBLI’s Centenary Ride saw the group saddle up at the charity’s Aylesford village. They’ll then ride down to catch the ferry to France, continuing through mainland Europe, before arriving at Belgium’s iconic Menin Gate war memorial in time for the playing of the last post on Saturday.

Every penny raised by the ride will go directly to supporting vulnerable veterans through RBLI projects such as the Centenary Village  a £14 million development of apartments, family homes, assisted-living accommodation and a community centre which the charity says will see them provide crucial support for vulnerable veterans for the next 100 years.

RBLI was established in 1919 to provide support to wounded, injured and sick troops returning from the Great War. The charity now provides homes to 300 veterans and their families on their village, and provides direct employment through an on-site factory, Britain’s Bravest Manufacturing Company.

Speaking at the event, Sir Michael Fallon said: It was a real privilege to launch the RBLI Centenary Ride in this most important year for this great charity.

RBLI’s Centenary Village is a campaign of national significance. It will truly become a beacon of veteran welfare for ex-servicemen and women from all four corners of the UK. I wholeheartedly support the campaign.

The launch was Sir Michael Fallon’s first return to RBLI after opening the charity’s 24-specially adapted apartments in November 2017.

Taking part in the Centenary Ride are a team of six former Gurkhas, all of whom work for RBLI’s social enterprise Britain’s Bravest Manufacturing Company (BBMC), which manufactures pallets and signs for clients including Highways England and Network Rail.

Joining them are Neil Young and Peter Ketley. Known as the Grandads of the Atlantic, the two veterans broke the world record for oldest pair to row the Atlantic completing the challenge in 63 days in February at the combined age of 123. The former paratroopers became official RBLI Ambassadors for their heroic feat.

Steve Sherry CMG OBE, RBLI Chief Executive, said: To have so many people, from all over the country, join the RBLI Centenary Ride in support of our charity is nothing short of phenomenal. The money raised will make a genuine difference to the lives of some of the country’s most desperately in need veterans.

“We’re also incredibly thankful to Sir Michael Fallon for taking the time to launch our ride today and for his on-going support of our Centenary Village development.”

Mike Whiting, Kent County Council cabinet member for highways, said: I’d like to wish all the riders taking part in the Royal British Legion Industries centenary ride a safe and enjoyable trip as they travel through the historic Great War battlefields of France and Belgium.

We work closely with the RBLI through our highways department as they produce a wide variety of products at their Aylesford site, including signs for our roads in Kent.

Our road safety team has worked with the RBLI to support them in training and preparation for their ride and our own road safety officer Tom Morton, a keen cyclist, will be taking part too.