There But Not There Leaves Lasting Legacy 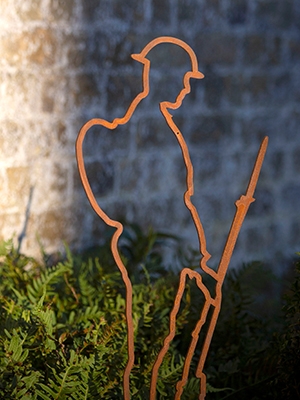 A high-profile national remembrance project set up to commemorate a century since the end of the First World War has left its own legacy to Royal British Legion Industries (RBLI), ensuring that its work continues to benefit the country’s most vulnerable veterans.

There But Not There (TBNT), run by military charity Remembered, was launched in 2018 to commemorate, educate and heal through the installation of moving WWI Tommy figures in communities throughout the UK.

With the support of Armed Forces Covenant Fund Trust, more than 4,000 poignant installations took place, bringing the 888,246 lost during the conflict off memorial walls and into physical public spaces, reminding the public of the conflict’s grave impact on communities across the country.

With its objectives achieved, TBNT now passes on its own legacy to RBLI, which provides crucial employment opportunities and homes to veterans of all ages from all four corners of the UK. The decision, which has been welcomed by the campaign’s patrons, will see TBNT transfer the evocative Tommy campaign to the military charity.

The move by TBNT coincides with RBLI celebrating its own centenary this year having been established in 1919 to provide crucial support to troops returning from WWI, establishing a village in Aylesford, Kent, which today supports hundreds of veterans every year.

RBLI and TBNT first joined forces at the beginning of the commemorative Tommy project, with veterans at RBLI’s social enterprise, Britain’s Bravest Manufacturing Company, producing a range of Tommy figures and the responsibility for their distribution.

Former head of the British Army and There But Not There patron Lord Dannatt said: I am delighted that RBLI will be continuing the remarkable work achieved by Remembered over the last two years. The Tommy is an iconic figure symbolising sacrifice and service. RBLI are the ideal partners to keep this powerful symbol in the forefront of the nation’s recognition of those who have paid the ultimate price for our freedom and security.

Photographer Martin Barraud, the artist behind the installations, said: There But Not There was initially set up in Penshurst to recognise those lost in the First World War when there was a great distance between ourselves and the conflict – both in terms of time and understanding. Through the project’s wider appeal, I am incredibly proud to think that we brought the public a little closer to those lost in the Great War and helped bring the men and women back into the communities they left, never to physically return more than 100 years ago.

RBLI chief executive Steve Sherry said: There But Not There had truly immense success in bringing the remembrance of those lost in the Great War into the public’s mind.

As a charity set up in 1919 to provide support to those who were fortunate to return home, RBLI has core values of both remembering those who were lost, but also looking forward to support those who returned in need. Something we are proud to still be doing today.

We eagerly look forward to continuing this fantastic project, working to build on the positive national impact left by There But Not There as RBLI continues to support veterans for the another 100 years.

In its 2019 centenary, RBLI announced £22 million plans to build the Centenary Village a veterans community comprising family homes, assisted-living apartments and a community centre, which will see the charity support hundreds of the most in-need ex-servicemen and women every year for another century.

Her Majesty the Queen marked the next stage in the Centenary Village construction with the placing of a time capsule in during a visit in November.

You can visit the RBLI x TBNT storefront here